Among the Gospellers who went to Germany are five members of First Congregational Church of Waukesha—Malena Koplin, Dawn Ollhoff, Kimberly Redding, Mark Schmitt, and Stephanie Stelpflug. Before departing they were commissioned by their pastor, Brittany Barber. Here is a reflection on the German experience presented in worship by Malena. 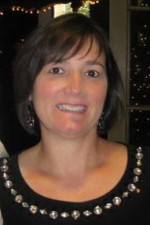 On June 26 in service Brittany commissioned us for our trip to Germany. Curiously, she challenged us to identify this trip not as a “tour” but a “pilgrimage”.  I didn’t think much of that description except that it seemed like one of those things pastors have to say during service.

Then I went there.

In preparation for today, I looked at several dictionary definitions of pilgrimage, but I liked this one from Wikipedia the best: It is a journey to a shrine or other location of importance to a person’s beliefs and faith, although sometimes it can be a metaphorical journey into someone’s own beliefs. So you can understand my confusion. I didn’t expect to find a religious shrine in Germany. However, I truly did experience a metaphorical journey into my own beliefs.

On our last Sunday in Germany we joined an incredible outdoor worship service in the amphitheater of a small town park. Along with our choir, several other groups shared music: a brass band, a children’s guitar choir, and a contemporary duo. Many other elements of the service were led by children from the Sunday school and community day care center. The service included two baptisms, including that of a 10-year-old boy. A year earlier, after seeing an infant baptism in this same park, that boy said, “Next year, that’s gonna be me.” Many of the roughly 200 people who attended this outdoor service were not members of the congregation. Nearly all, however, stayed for coffee, Küchen, brats and conversation.  Our accompanist, Dan, even had a short violining jam session with some of the German youth.

Rev. Angelika, while talking with us before the service, explained that she is a missionary to the unchurched, yet nonetheless spiritual, members of the community.  This rural area had been part of East Germany, where even casual affiliation with a church community could put you on the secret police watch list. Some of our host families had been spied on for years, only later to learn that the informants included fellow parishioners. Is it any wonder many are wary of institutionalized religion?  Angelika’s outreach to the unchurched children—and adults—in this community is healing deep wounds and shifting perceptions of what it means to “be church.”  This little congregation in Kroppen is living out God’s love for each one of God’s children.

I think about what we are doing here in our own church and in the WI UCC in regards to the SHIFT project and see how we are being missionaries right here in Waukesha.

On our first full day in Germany, we visited a castle originally built in the late 1600s by a noble family that served Brandenburg’s princes. The last surviving members the family fled the area after WWII. Needless to say, the Communists did not look kindly on royal titles or nobles’ estates. Today, the castle offers rooms—and great views of the surrounding gardens—to school groups and vacationing families.

Later that day we visited a woman known as The Apple Countess of Brandenburg, who lived nearby. Daisy von Armin is the daughter-in-law of the last owner of the castle. Although her father-in-law died in Western Germany, his son—now the Count von Armin—came back to Brandenburg after German unification.  The castle was by this time state property, but the count and countess purchased land once ruled by their ancestors.

Daisy’s husband began farming the land, using western techniques to increase yields. Countess Daisy, however, who had previously owned a bookstore, struggled to find a new vocation in this rural area. After months of false starts, disappointments, and prayer, she finally had an epiphany while driving along a country road covered with hundreds of fallen, rotting apples.  Like much of the produce grown behind the iron curtain, East German apples were too small and misshapen to compete in the broader EU market. However, Daisy realized apples could help her build a business. Using these little apples, she could help her struggling neighbors, many of whom had lost their jobs and savings in the wake of 1989.

Daisy bought a machine to peel and crush the apples, then pasteurize the juice. She had the equipment mounted on a small trailer. Pulling this portable juicer, she drove from farm to farm. For a small fee she could convert neighbors’ useless apples into juice that they could use or sell.  Over time, she expanded the business, hiring a number of local women to make apple jelly, candy, candles, and soap.  Fruit leather, snack bars, and vinegar soon followed.

Eventually Daisy von Armin and her neighbors planted more apple trees—both heirloom and new varieties. Today, the Apple Countess of Brandenburg also runs a bed and breakfast, a cafe, gift shop and online shopping site.  Her employees include both German and Polish neighbors.  Daisy’s Haus Lichten Hain farm  has helped many families—German and Polish—keep their own homes. Haus Lichten Hain, by the way, means House of Light.

The Apple Countess explains her story as a mission—as a vocation, not a business. Strengthening the local economy and helping her neighbors develop financial security are as much a part of her business plan as are profits. After a delicious lunch from the Apple Countess’ cafe, Daisy gave us a tour, and let us rehearse in her barn. Both she and her staff were moved to tears when we sang for them. Many of us were tearful at her depth of concern for her community. http://www.die-apfelgraefin.de 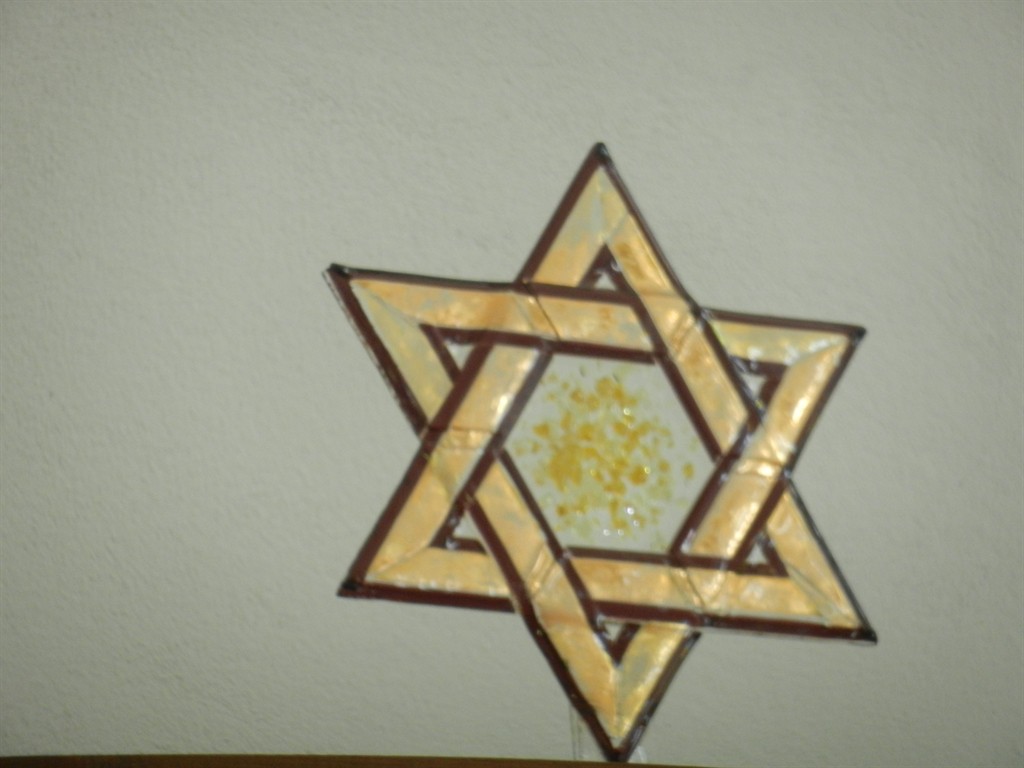 Star of David at the first Synagogue established after WWII

Speaking of community, the experience that was the most overwhelming to me was a visit to the first synagogue to be re-established in the state of Brandenburg since WWII. The building itself had been built and consecrated as a Christian church by French Huguenots—religious refugees—in 1714. In the 19th and 20th century, the so-called “castle church”  housed one of three Lutheran congregations in the city of Cottbus.  Attendance waned during the Communist era, and after unification, the three congregations merged. The castle church became a place for art shows, concerts, and ecumenical gatherings… but that wasn’t enough to cover upkeep costs for a 300-year-old structure.

By  2014, Cottbus’ growing community of German and Russian Jews was looking for a worship space. The Evangelical Lutheran Church (our partner denomination in Germany) decided to give the building to this budding Jewish congregation. Red tape prevented an outright donation of the building, but the Lutheran church sold the building to the Jewish congregation well below market value.  But this was no simple real estate deal.  The building had to be formally “decommissioned” by the Evangelical church; relics, parish records, and Christian symbols had to be removed.

As officials decided where to move the religious symbols,the Jewish and Christian congregations worked together to guide the  local artisans who transformed the church into a synagogue.  Wood from the altar table was used to construct the ark that holds the Torah scrolls. This star of David on the ark used glass from a synagogue destroyed by Nazi thugs during the Night of Broken Glass. 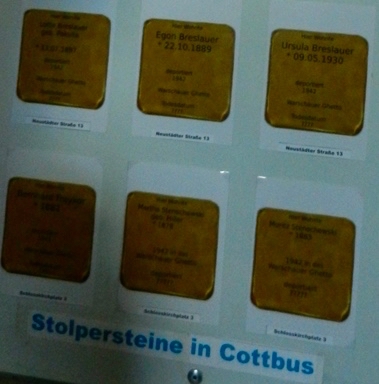 There were two other incredibly moving things we learned in that sacred space. First, we were introduced to the Stumbling Stones project. Each hand-crafted bronze stone includes the name, birth and death dates (if known) of a Jewish person or family murdered during the Holocaust. Artist Gunther Demnig creates and embeds each plaque in the cobblestone sidewalk in front of the last known residence of the victims. Since 1996, Demnig has made and placed more than 60,000 Stolpersteine throughout Germany.

The second was the Coventry Prayer. This litany was written in 1958 and is recited each day at noon in a church in Coventry, England.  On Fridays, worshippers offer the prayer in the ruins of a bombed-out cathedral that was replaced by that new church. 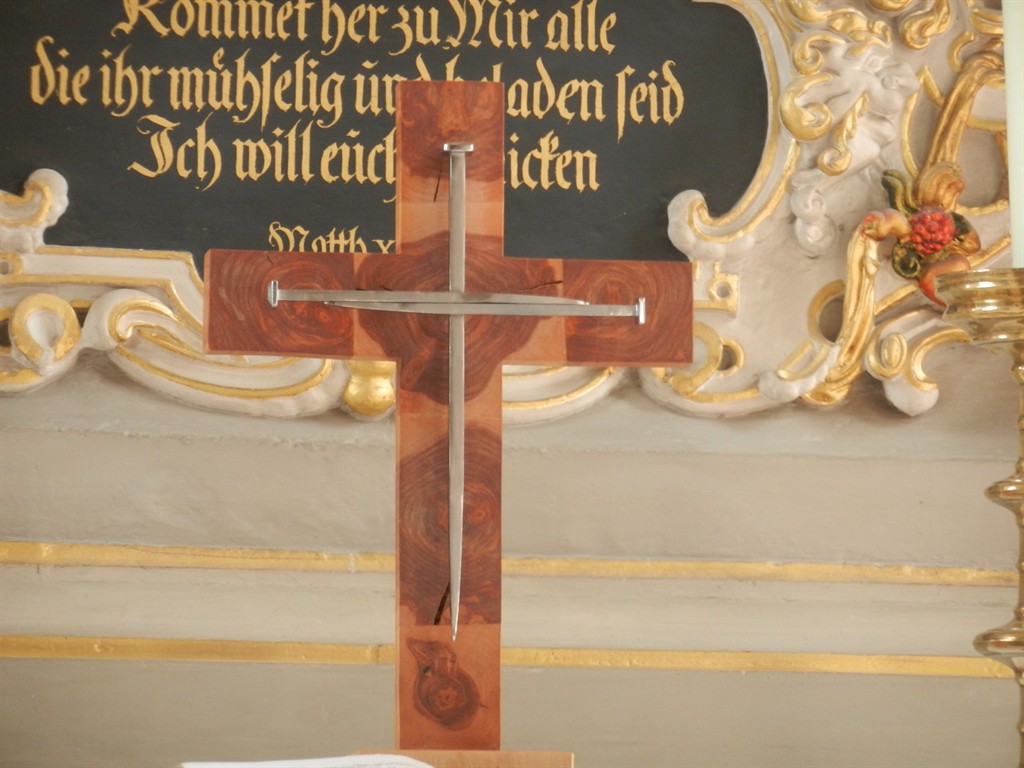 After Coventry was carpet-bombed in 1940, hand-forged square nails from the devastated cathedral were scattered around the property. Parishioners collected the nails to construct memorial crosses, but couldn’t agree on the inscription. Should it read “ Father Forgive Them” or “Father Forgive Us?” The English Christians settled on the words, “Father Forgive.” It was a way of confessing the shared responsibility for war. Years later, the city of Coventry gifted one of these crosses to the castle church in Cottbus. This was one of the relics that had to be removed from the building before it could become the synagogue.

As British partners gave Coventry crosses to German congregations, the prayer also resonated with German Christians. It symbolizes the journey of reconciliation and forgiveness that the German people have walked for more than 60 years. The prayer resonated with us is in light of Germans’ commitment to refugees from Syria and other places torn apart by war. Our group was given the prayer and recited it together before we left the synagogue. It was a solemn conclusion to our visit to this sacred place and  even then we knew it was something we wanted to share with you. We’ll conclude this reflection by reciting this prayer together.